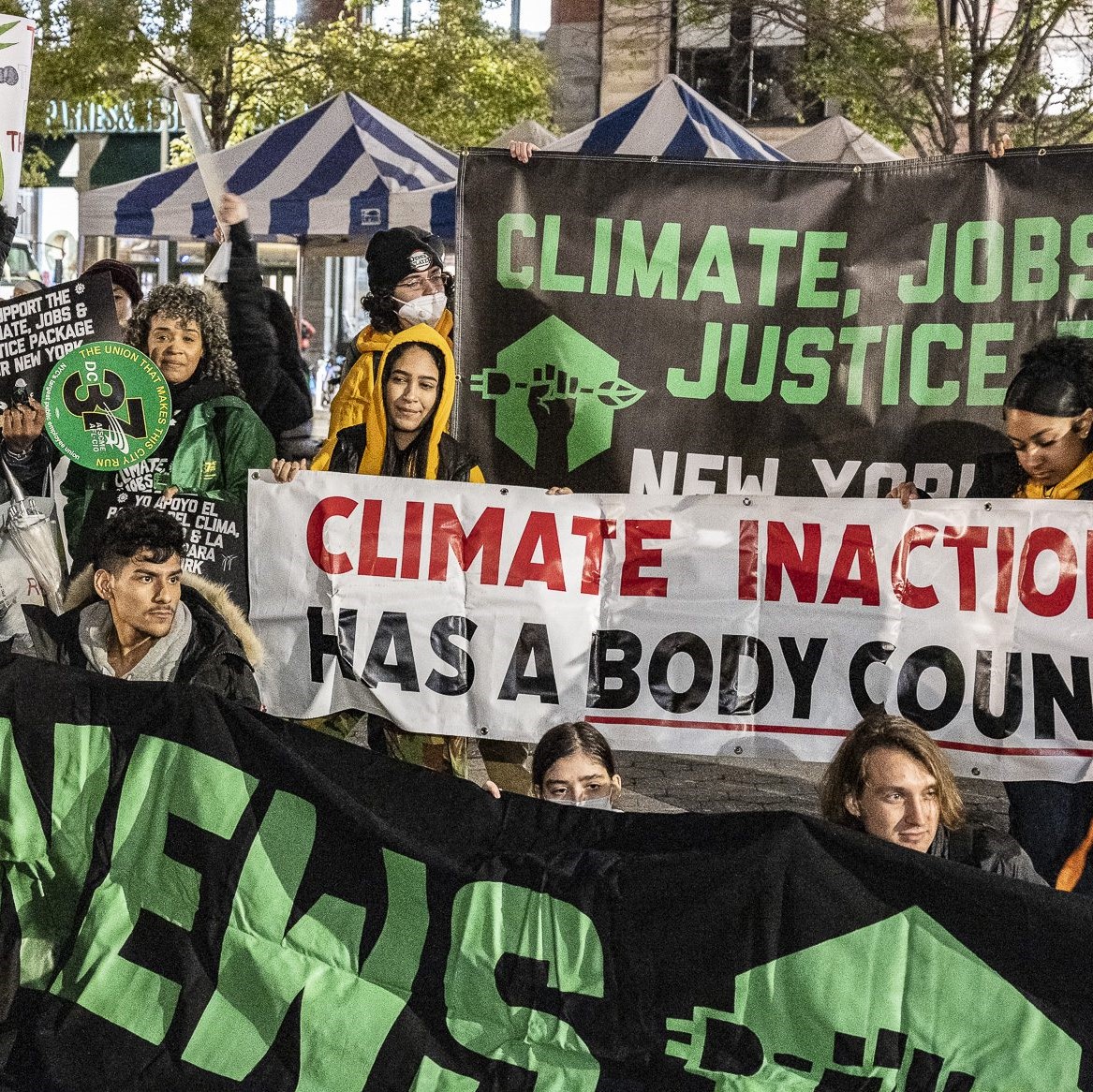 New York’s hard-fought climate law was a big win for the climate justice movement. The landmark Climate and Community Protection Act (CLCPA or Climate Act) passed in 2019 set ambitious targets for both emission reductions and environmental justice, including a mandate for 40% emissions reduction by 2030.

It’s already 2023. And unless something big changes, New York state is not on track to meet the 2030 mandate. Why? Almost four years after the climate act became law, there are no sustained investments for its implementation.

Much like New York’s landmark climate law, the Ithaca Green New Deal is also in need of sustained funding to achieve its goals: carbon-neutrality community-wide by 2030, and addressing the city’s stark social, historic, and economic inequities. Local programs like Ithaca’s Green New Deal could be funded through state level investments, if New York state were to establish funds dedicated to meeting New York’s climate mandates.

New Yorkers clearly support investing in climate justice. In the November election, New Yorkers across the state voted overwhelmingly in favor of one-time climate funding on a ballot proposition, the Environmental Bond Act. Statewide, 60% of voters approved the proposal, with an impressive 78% yes vote in Tompkins County.

The $1.5 billion from the Bond Act will be dedicated to climate adaptation and mitigation projects for New Yorkers, providing protection from extreme weather caused by the climate crisis. It’s a good start – but it’s not enough. Sustained investments are needed to ensure a full and just transition to renewable energy.

The NY Renews Coalition has a plan to fund the transition. The coalition, which successfully campaigned to pass New York’s climate law in 2019, includes 300+ organizations across the state, including several Tompkins County organizations such as Sunrise Ithaca and Mothers Out Front Tompkins. Four years after the passage of the climate law, NY Renews is still fighting for climate justice, and is focusing this year on a plan to win massive investments for climate and environmental justice.

A key component of NY Renews’ package, the Climate and Community Protection Fund (CCPF), provides the spending plan the state needs to direct funds towards real community-based climate solutions like the Ithaca Green Deal. Revenue to fund the Climate and Community Protection Fund (CCPF) could come from a number of sources, including Gov. Hochul’s proposed Cap and Invest model which she recently announced during her State of the State address.

If carried out equitably, the Governor’s proposed Cap and Invest model could be a key funding source for New York’s energy transition—but that’s a big if. NY Renews and other NY climate and environmental justice advocates will have to be deeply engaged in the implementation process to avoid mistakes made by other states when implementing cap and invest systems. We cannot allow polluters to continue their harmful behavior, deepening pollution hotspots in ways that exacerbate environmental racism and injustice.

That said, cap and invest isn’t the only revenue source available to the state. Additional climate funding could be unlocked through the suite of “tax the rich” measures proposed by the Invest in Our New York coalition. Revenue could also be generated by eliminating hundreds of millions of dollars of fossil fuel subsidies included in the state’s budget annually, or by passing the Climate Superfund Act, which would impose a penalty on New York’s worst polluters.

Passing the Climate, Jobs, and Justice package—with the goal of implementing New York’s Climate Act—could have transformative benefits for workers and communities across New York. Just some of these benefits are improved public health, stronger rural food systems, reduced energy bills, and stronger transportation systems. Studies predict that implementing the Climate Act would create up to 150,000 good family-sustaining jobs installing solar panels, maintaining wind turbines, and retrofitting buildings over the next 10 years.

We can’t backtrack on our climate promises any longer. New York state needs to fully fund the mandate of New York’s landmark climate law, and invest in the Ithaca Green New Deal in the process. This is our year to fund climate justice.

SouthWorks Green Vision Has Opportunity to Do More
January 14, 2023