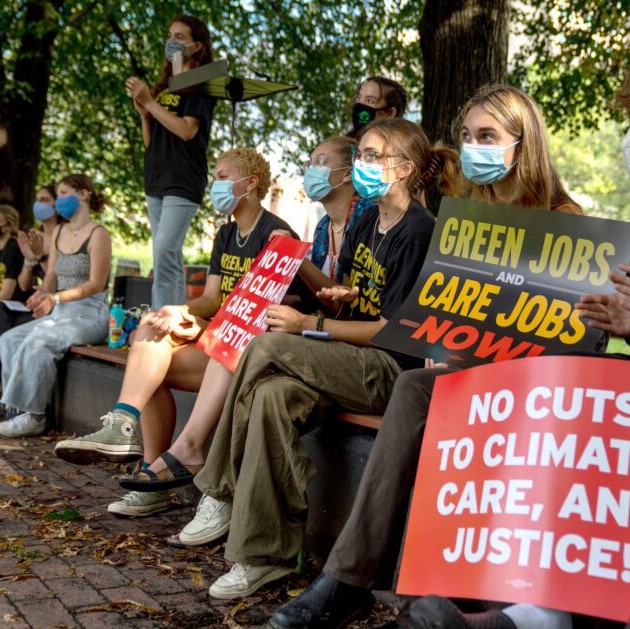 Luis Aguirre-Torres’s recent decision to step down as the Ithaca city sustainability director came as a deep disappointment to many in Tompkins County. His plan to make the city carbon neutral by 2030 while making sure climate justice was central to this endeavor was ambitious and inspiring and embodied the spirit and vision of the Ithaca Green New Deal (IGND).

Fortunately, Rebecca Evans remains in place as the city sustainability planner. Her expertise, experience and talent, as well as a longstanding commitment to a just and equitable society, will help ensure that the IGND maintains its momentum. But the community also needs to stay engaged and support her work if the IGND is to meet its goals and continue serving as a national model.

Besides joining in local activism to promote the IGND, it is important that Tompkins County residents advocate at the state level for effective climate and clean energy policies. The passage in 2019 of the Climate Leadership and Community Protection Act (CLCPA), the nation’s most progressive climate law, carved out the path for moving forward.

NY Renews, a coalition of more than 320 environmental justice, community, faith, labor and multi-issue organizations, played a key role in getting the CLCPA on the books three years ago. Local organizations in the statewide coalition include Climate Justice Cornell, Sunrise Ithaca, Sustainable Finger Lakes and the Tompkins County Climate Protection Initiative.

With the CLCPA signed into law, the fight has shifted to the enactment of legislation needed to achieve its critical goals. As part of this effort, NY Renews recently announced the public campaign launch for its Climate, Jobs and Justice Package. The campaign seeks to build public support for this crucial set of bills ahead of the legislative session that kicks off in January 2023.

The Climate, Jobs and Justice Package, if approved by the State Legislature, will rapidly decarbonize New York, make the state healthier and more equitable, ensure a just transition for workers and help create an accessible green economy for all. Overall, the bills individually and collectively advance the goals of the CLCPA.

Beginning Nov. 16, communities across the state will be rolling out the Climate, Jobs and Justice Package, looking to make the promises of the CLCPA a reality. The Ithaca event, sponsored by Climate Justice Cornell and others, will be Nov. 18 at 5 p.m. at Thompson Park, across from Gimme! Coffee on North Cayuga Street. People planning to attend can RSVP at tinyurl.com/2c8b8kfs.

“Ithacans have fought hard to ensure that equity is at the center of the IGND, and the Climate, Jobs and Justice Package would extend that commitment to the state level,” said Siobhan Hull, coordinator of Sunrise Ithaca and member of Climate Justice Cornell. “As vulnerable New Yorkers continue to be hardest hit by pollution, economic recessions and the COVID-19 pandemic, it is more important than ever to invest in our frontline communities and secure a just transition for all.”

The Climate, Jobs and Justice Package has three main components: 1) fully fund the CLCPA so that it can achieve its objectives; 2) build renewable energy for all and create green union jobs; and 3) hold polluters accountable and ensure everyone pays their fair share in taxes. The details for each of these include:

Climate and Community Protection Fund creates a pool of money to ensure sufficient investment to fund the CLCPA. The act’s core investments would include broad labor, procurement, community benefits and responsible contracting standards.

Climate Accountability Act provides state agencies with the authority and guidance required to implement the Climate Act and ensure that our energy system is accountable and transparent to the public.

Gas Transition and Affordable Energy Act will give the Public Service Commission the power and direction to align gas utilities with the Climate Act’s emission reduction and climate justice mandates.

Blueprint Bill provides a plan to direct the replacement and redevelopment of New York state’s fossil fuel facilities and sites by 2030.

3. Make polluters and the wealthiest New Yorkers pay what they owe

Fossil Fuel Subsidy Elimination Act will end the most egregious state subsidies of $330 million each year to the fossil fuel industry, a major contributor to the climate crisis.

Invest in Our New York’s Plan to Fund Our Future is a revenue and spending package from the Invest in Our New York (IONY) coalition that will ensure the state eliminates wasteful handouts to businesses and the wealthiest New Yorkers pay their fair share to fund our climate law.

Make no mistake, securing the passage of the Climate, Jobs and Justice Package will not be easy. Implementing these kinds of transformative policies will always generate opposition. In this case, the fossil fuel industry has mounted an aggressive lobbying campaign to undermine the state’s climate targets.

A new report just released by the nonprofit Public Accountability Initiative describes in devastating detail the attempts of various players in the fossil fuel industry to obstruct climate action in the state. According to the report, millions of dollars have been spent by the industry and its supporters “to delay, water down and otherwise frustrate the implementation of the CLCPA and other key climate legislation.”

The study points to the presence of fossil fuel executives on the Climate Action Council, the body appointed to create a roadmap for meeting the climate and energy goals of the CLCPA, and questions their support of the state’s clean energy initiatives.

“Legislators, communities and other stakeholders invested in a cleaner, greener, decarbonized future for New York must stay vigilant around efforts by the fossil fuel industry to muzzle and erode the state’s most far-reaching climate legislation ever passed,” cautions the report.

So, keeping these words in mind, be sure to attend the unveiling of NY Renews’ Climate, Jobs and Justice Package at Thompson Park on Nov. 18, and demonstrate your support for real climate action that will bring about a greener, healthier and more equitable future for all New Yorkers.

Peter Bardaglio is the coordinator of the Tompkins County Climate Protection Initiative (TCCPI) and executive director of the Ithaca 2030 District.