Switching to Induction Cooking: Good for Food, Good for Planet 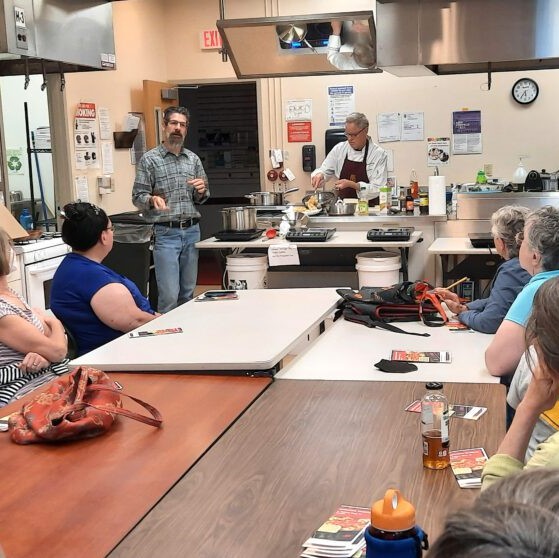 If you love cooking on your gas stove and think there’s no better alternative, we’ve got news for you! Induction cooking has myriad advantages that your gas stove lacks.

Retired chef and Cornell Senior Lecturer Rupert Spies reported, “The first time I used a commercial induction cooktop in Germany in the ’90s, I was blown away by how fast it heated the cooking vessel! Now, I have an induction range in my home.”

He went on to explain some of the ways induction cooking benefits the culinary process.

“Fish is one of the most delicate proteins to cook,” Spies said. “On an induction burner, I can cook it at just the right temperature so it doesn’t overcook. Likewise, anyone who has melted chocolate knows how quickly it can seize, becoming thick and unmanageable. On my induction cooktop, I can set it at exactly the desired temperature and keep it there, producing a smooth product. An added bonus is that cleaning the cooktop is a breeze. Messes just wipe off with a wet cloth.”

How does induction work?

Induction cooking is fairly new to U.S. households but has been in use in Europe for some time. This cutting-edge technology creates heat by passing an alternating electric current through a copper coil beneath the cooking surface, creating a magnetic field that generates heat directly at the bottom of the pot. The pot heats up almost instantly, reducing wait time and energy use.

Because only the pot itself becomes hot, heat does not escape below and around it. With induction cooktops, 85 to 90% of heat generated is used directly for cooking, compared with 35% with gas stoves and 75 to 80% with traditional electric stoves (Natural Resources Defense Council). Kitchens stay cooler, reducing air-conditioning and ventilation needs. This also means greater safety, as there are no open flames to cause fires.

What’s more, according to the Natural Resources Defense Council, “Methane, the main ingredient found in natural gas, is far more potent a greenhouse gas than CO2. The lifetime of atmospheric methane is relatively short … but while it sticks around, methane is more than 80 times as effective at trapping heat than carbon dioxide.”

Although replacing a gas cookstove with a traditional electric one would eliminate your household’s reliance on natural gas for cooking, a move instead to the highly efficient technology of induction is a far more energy-efficient option.

While lowering your energy use and improving your cooking experience are persuasive reasons to switch from gas to induction cooking, the negative effects of gas cooking on your health and that of your family can provide an extremely compelling motivation to make the switch.

Disturbing new studies, among them from Stanford and Massachusetts Institute of Technology, have found that poor indoor air quality resulting from gas stoves is far more damaging to health than previously thought.

Mothers Out Front, in a report summarizing this research, reported, “Gas stoves, particularly when unvented, can be a primary source of indoor air pollution. … A robust body of scientific research shows the pollutants released by gas stoves can have negative health effects, often exacerbating respiratory conditions like asthma.”

One study found that children living in homes with gas stoves were 42% more likely to experience symptoms associated with asthma, and 24% more likely to be diagnosed with lifetime asthma.

Induction ranges are more expensive than many gas or traditional electric stoves. They require a 240-volt circuit, which many older kitchens lack and which are expensive to install. This cost is offset over time by the greater energy efficiency of induction cooking.

If a new range and electrical hook-up is not in your budget, single- or double-burner (or “hob”) induction cooktops are a much less costly alternative and can serve the majority of a household’s cooking needs. They plug into regular electric outlets.

Marie McRae of Ellis Hollow does most of her cooking on a single hob induction burner.

“I really like the fact that induction gets me away from propane,” McRae said. “I try to use it for most of my cooking, falling back on the propane if I have a lot of little leftovers to heat up. I find I can usually get away with getting one part of the meal cooked and then, because of the rapid response time, I can, for instance, cook veggies while the other part(s) of the meal wait for 3 minutes. I can cook rice on the hob and, when it’s mostly done, set it aside to finish absorbing water while I do up a stir fry on the hob.”

What is different about induction cooking?

Faster cook times are a pleasure for the experienced cook, but getting used to induction cooking requires a bit of a learning curve, like any new technology. Cooks must adjust to burners that reach their full heat setting almost immediately. Since the pots heat so quickly, all ingredients should be measured, peeled, chopped, sliced and/or grated and ready to go into the pan as soon as the heat is turned on, a French culinary practice called “mise en place.”

“I bought [my induction burner] for $40, and it seems a real bargain to get me away from burning propane in my house,” McRae said. “But like anything, one has to be willing to play with it, to learn new things, to look at it as a good thing, easy to access. I love to cook and to play with cooking, and a goof is only an opportunity to learn something.”

Not all cookware is compatible with induction cooktops. Because the pots are heated by electromagnetic current, they must contain iron particles. Cast iron, enameled cast iron and most types of stainless steel are compatible; glass, aluminum and all-copper cookware is not. Newer cookware will have a symbol on the bottom showing it is induction-compatible.

It is also important for the cookware bottom to be flat. An uneven surface or one with ridges will prevent optimal contact with the burners.

Usually, a simple magnet test will show if cookware is compatible. If some of your cookware needs replacing, reasonably priced sets are available. Thrift shops, yard sales and, locally, Finger Lakes ReUse can also be a source of compatible, inexpensive pots and pans.

Find out more at upcoming workshop

Guillermo Metz of Cornell Cooperative Extension of Tompkins County and Spies will conduct the next Induction Cooking Workshop Sept. 21 from 5:30 to 7 p.m. It will feature a cooking demonstration and an opportunity to try out induction cooktops. To register, call Metz at (607) 272-2292×185 or email gm52@cornell.edu.

Wendy Wallitt is a member of Mothers Out Front Tompkins, a national organization dedicated to protecting all children from the climate crisis that impacts their health today and a livable climate for them tomorrow. She and her husband, Rupert Spies, are longtime residents of Tompkins County and have two grown sons and two young grandchildren.