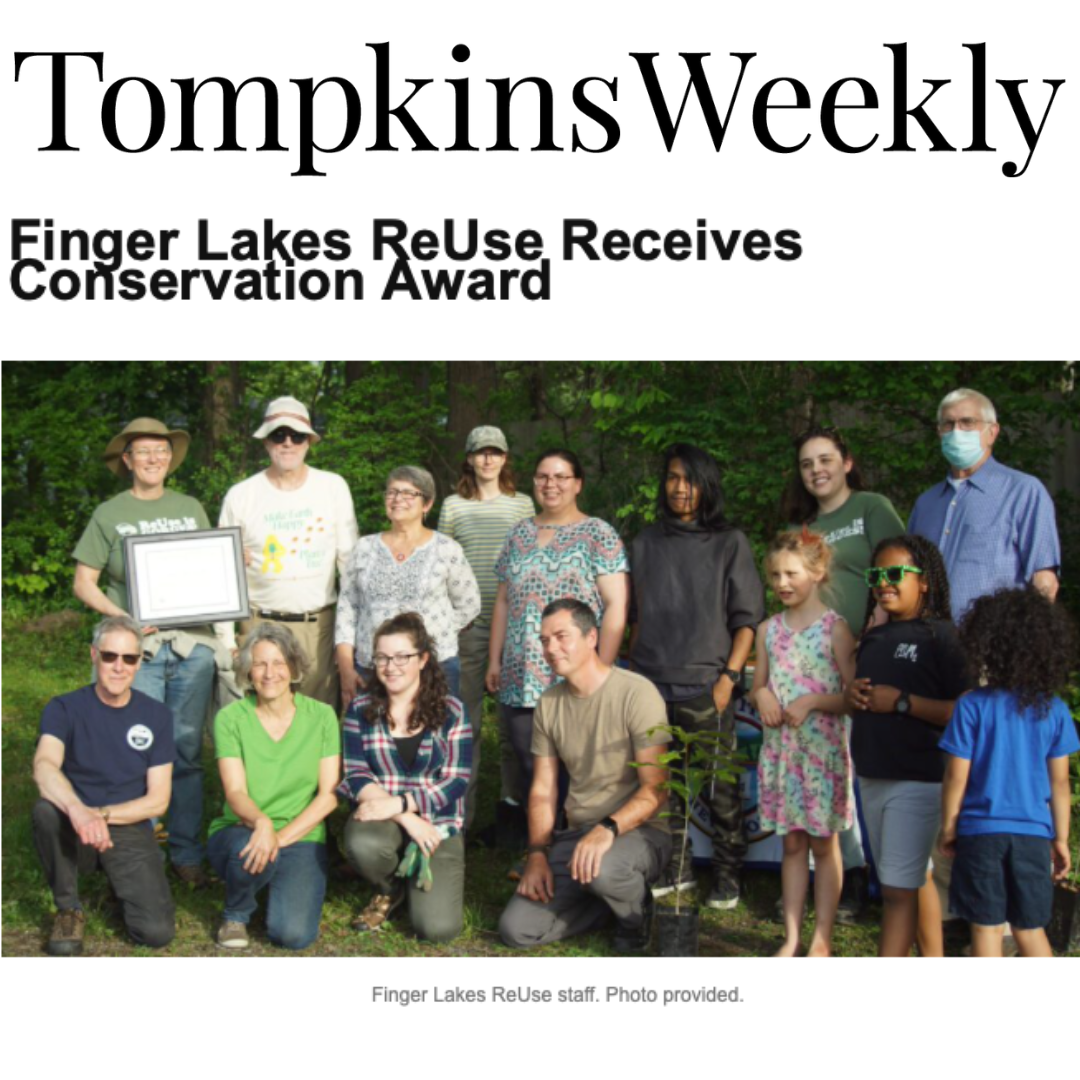 (Tompkins Weekly, 6-22-22, By JoAnn Kowalski) Finger Lakes ReUse (FLR) has received the 19th annual Richard B. Fischer Environmental Conservation Award for 2021. The award was established in 2003 by the Town of Ithaca Conservation Board to honor Fischer for his significant efforts to preserve important environmental resources in the town of Ithaca.

Members of the Conservation Board presented the annual award to representatives of Finger Lakes ReUse at a tree planting ceremony May 25 at the town of Ithaca’s Tareyton Park. Established tradition calls for trees to be planted and tagged to honor the awardee. In this instance, several burr oak saplings were planted.

Finger Lakes ReUse is being honored for its years of work dedicated to conserving useful materials and promoting the reuse of tons of items that might otherwise be routed to landfills. The opening of its new ReUse MegaCenter in 2021 helps residents access affordable products that will be reused and at the same time enables others to clear their living space of unwanted items.

The center also offers employment opportunities to individuals who assist with the recycling effort. In addition, it has prevented retail spaces from being unoccupied.

An especially large project saw FLR helping volunteers to clean up deconstructed building materials like hardwood flooring salvaged from the recent Collegetown Catherine Commons development project. Their far-ranging impact on the community has resulted in many efforts to promote reuse and recycling in order to prevent materials unnecessarily going to landfills.

Each year, the Town of Ithaca Conservation Board announces a winner of the Richard B. Fischer Environmental Conservation Award and has done so for the last 19 years. The award is named in honor of the late Richard B. Fischer, who, throughout his decades as a resident of the town of Ithaca, made efforts to improve the quality of the natural environment within the town, Tompkins County and the state of New York by teaching and example.

Primitive Pursuits was honored in 2020 as the winner of the Conservation Award for its work in providing leadership and wilderness skills education to youth. And the previous year, the Cayuga Bird Club received the award for the ongoing work its Conservation Action Committee has done removing invasive species and planting native flora to improve bird habitat on Lighthouse Point.

As an educator, Fischer taught generations of Cornell University students the precepts and practice of environmental conservation through courses such as Environmental Writing and Field Natural History. As a writer of hundreds of scientific and popular articles, he informed and engaged the interest of his peers and members of the general public of all ages in a wide range of conservation-related topics.

As a naturalist, Fischer undertook such projects as the provision and monitoring of scores of eastern bluebird nesting boxes in appropriate habitats throughout the town to encourage re-establishment of a viable population of the beautiful state bird of New York for the enjoyment of generations of residents.

As a public citizen, he led the successful campaign to enact state legislation that mandates beverage container deposit returns, thereby reducing litter in the environment throughout the state.

The Town of Ithaca Conservation Board was initially established as a Conservation Advisory Council by the Town Board in February 1990. Conservation advisory commissions are municipally appointed volunteer groups that provide recommendations to their municipality on environmental matters.

They can be known by various names, such as environmental councils, conservation boards, green committees, land use councils and other titles. The important connection between all these groups is to review land use and open space issues within the municipality as part of the local government.

In addition to the presentation of the annual Fischer Environmental Conservation Award, the Conservation Board’s work priorities include the following: protection of scenic views, environmental review of development proposals, invasive pest and deer management and public outreach to promote knowledge of environmental topics important to our area.

The Conservation Board is a diverse group of town of Ithaca residents who volunteer their time and energy toward the preservation and protection of the town’s natural and scenic resources.

The board is currently seeking dedicated individuals who are interested in the mission of the Conservation Board to protect and sustain our valuable natural resources, scenic views, trails and parks and water supply. For an application or for additional information, contact Mike Smith, senior planner for the town of Ithaca, at msmith@town.ithaca.ny.us or (607) 273-1747.

Signs of Sustainability appears in the second and fourth editions of each month in Tompkins Weekly.