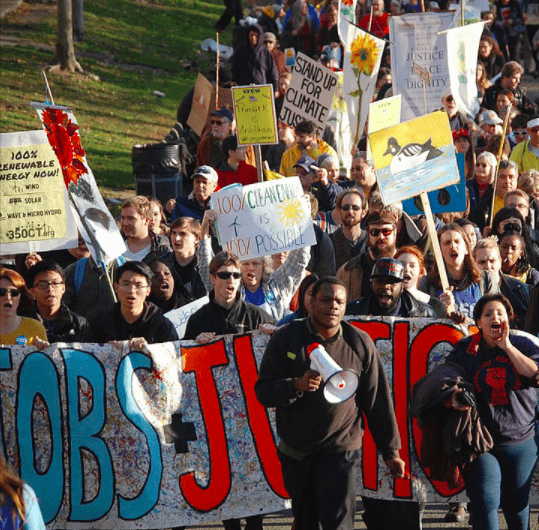 Learn why they are calling on ecosocialists and climate activists to fight alongside unionists to win major changes to the nation’s labor laws.

Why Are Climate Activists Fighting for Labor Law Reform?

We all know we need to see the end of fossil fuel exploitation, delivery, and use in the next few years. But we also need U.S. workers to thrive during the transition. Thus we need millions of clean energy and transportation jobs, and we need to ensure that people, not corporations and billionaires, profit in the new energy economy.

Sydney and Ashik will discuss how the Protecting the Right to Organize (PRO) Act strengthens the Green New Deal and empowers labor during the transition to an environmentally sensible economy.

The PRO Act streamlines union contract processes, bans replacing striking workers, prevents the misclassification of employees as independent contractors, legalizes secondary boycotts, and bans racist “right-to-work” laws currently in effect in more than half the states. The PRO Act has passed the House, but it faces adamant Republican opposition in the 50-50 Senate.

The time is now to change our political and climate landscape, but that won’t happen without a much stronger labor movement. Putting power back in the hands of the working-class majority ensures that those building our new sustainable society are also the ones shaping it.

Read “To Win a Green New Deal, Pass the PRO Act,” which Ashik and Sydney cowrote for Dissent magazine in March.

Register here! The event will also be livestreamed on their Facebook page and later will be posted on their YouTube channel.

More on the Presenters

Sydney Ghazarian leads digital strategy for The Climate Mobilization and Climate Mobilization project. She is also a founder of National Democratic Socialists of America Ecosocialist Working Group and worked to establish climate as a primary focus of the American Left. Sydney previously worked in journalism and in academic research. Sydney received her bachelor’s degree in Psychology from the University of California San Diego.

Ashik Siddique, a research analyst for the National Priorities Project at the Institute for Policy Studies, is particularly interested in examining how militarized U.S. domestic and foreign policy interacts with efforts to address long-term societal threats like accelerating inequality and climate change.
Prior to joining NPP, Ashik was the research and digital communications lead and a founding member of The Climate Mobilization. Ashik graduated from Wesleyan University with a degree in Neuroscience & Behavior, and worked for several years as a research coordinator of a study on PTSD in combat veterans of Iraq and Afghanistan at the Bronx VA Medical Center.

System Change Not Climate Change is a network of ecosocialists who believe capitalism is incompatible with prospects for a decent life for future generations on planet Earth. We are based principally in the United States and Canada but our perspective is internationalist and anti-imperialist. To learn more about them, visit their website.