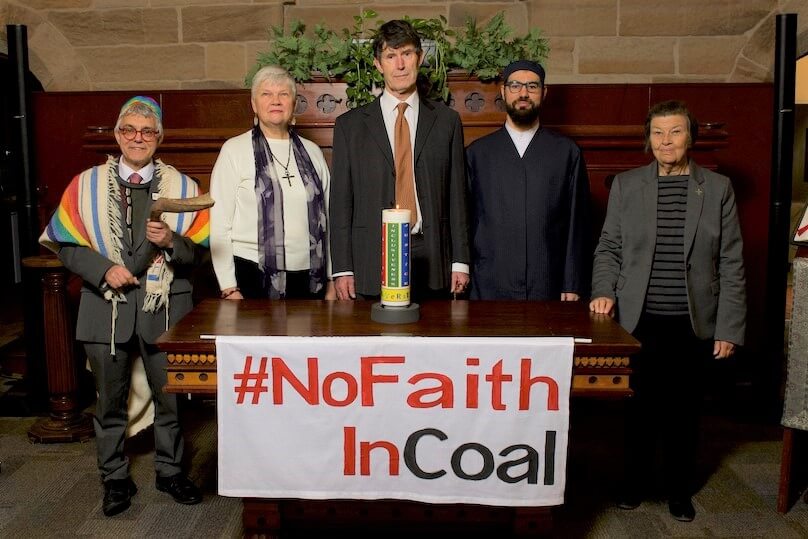 As Earth Day approaches, Religious leaders representing over 400,000 people of faith across upper NY state signed on to a statement calling for a transition away from fossil fuels. Join dozens of places of worship in the CNY region for a press conference via Zoom, called “Religious Leaders Support Transition Off of Fossil Fuels.”

A Zoom press conference announcing religious/faith leaders support for a transition off of of fossil fuels, why it is important we act now and steps proposed to reduce carbon emission in NYS to meet the goals of the C.L.C.P.A. will be held Monday, April 19th at 2:00pm. Register here! See below for details on speakers.


This Earth Day the planet has warmed about 1.1. degree C (2 deg F) compared to pre-industrial times.  Unless we take significant steps to reduce carbon emissions Earth will warm by 1.5 deg C this decade.

“The risks of hitting tipping points in the climate system become significant as we warm the Earth past 1.5 deg C with a real possibility of fundamentally changing the climate leading to runaway climate warming and disruption. This is a true, deep threat to human society”, says Robert Howarth PhD, Cornell University.

Given what a majority of the scientific community is saying, Climate Change Awareness and Action solicited support from religious/faith leaders calling for the community in CNY to start planning to transition off of fossil fuels.

‘We hope this statement will spark a community wide discussion across political parties on the steps we need to take to ensure that future generations will have a world they can thrive in”, says Peter Wirth, of CCAA.

The NYS Climate Leadership Community Protection Act passed in 2020 mandates a 40% reduction in greenhouse gases by 2030 . We need to start planning on the local level how we will reduce our carbon emissions in order to help the state meet its goal.

The statement below was endorsed by a broad spectrum of religious/faith leaders (Baptist, Catholic, Earth based Spiritualities, Episcopal, Hindu, Jewish, Lutheran, Methodist,  Muslim, Native American, Presbyterian, UCC, Unitarian, Sikh, Tibetan-Buddhist, Zen)….
“Given the dangers represented by the continued burning of fossil fuels to the planet we depend upon for life and the importance of the next ten years in keeping the planet under 1.5 degrees centigrade of heating, we urge the community in CNY to start planning a transition away from fossil fuels now.”

The endorsers are as follows:

Episcopal Bishop DeDe Duncan-Probe – One of the signers of a national call by Episcopal Bishops in 2017 affirming the scientific community’s overwhelming finding that climate change is real, human-caused, and undeniably destructive to human society, in reaction to President Trump’s executive order to rewrite rules aimed at curbing carbon emissions.

Oren Lyons – an internationally known Indigenous, human rights and climate change activist and scholar. Oren  first spoke on the issue of climate change at the United Nations in 2000.

Professor Robert Howarth – climate scientist, Cornell University – He is a member of the Climate Action Council, a 22-member committee preparing a Scoping Plan to achieve the State’s clean energy and climate agenda as outlined in the nation-leading Climate Leadership and Community Protection Act (CLCPA) passed by NYS in 2020. He received an honorable mention “50 People who Matter” in the Time 2011 Person of the Year issue.