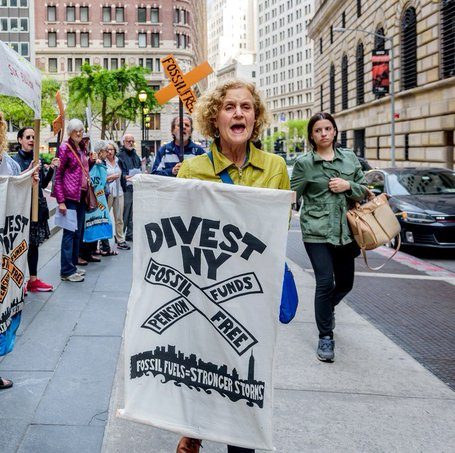 Big news today! New York State just became the largest pension fund in the world to take comprehensive climate action, including fossil fuel divestment. The $226 billion state pension fund will review and divest from the riskiest oil and gas companies within 4 years and decarbonize the entire fund by 2040. This came after years of campaigning by the DivestNY coalition.

In essence, New York State’s Comptroller, who is the sole custodian of of the states $226 billion pension fund has announced that his office will:

Read more about the announcement in the DivestNY Coalition media release and this background document.

In the 8 year history of the divestment movement, this is the biggest announcement by a pension fund and amongst the largest by any financial institution. It goes beyond the Fossil Fuel Divestment Act, legislation that DivestNY advocates had been pushing for years. And it’s all a real testament to the people-powered, inside / outside, lobby and advocacy campaign run by the multigenerational DivestNY coalition for years.

We did this together!!! – Please help us share the news!

Check out this social media kit for all the materials you need to share this news organically and widely including an embeddable video and sample email blast.